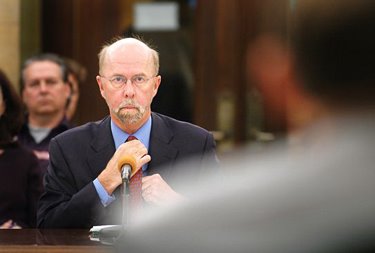 I recently read that Doug Steenland, CEO of Northwest Airlines, and his colleagues, are attempting to replace 4,000 U.S. flight attendants with foreign nationals as part of NWA's restructuring/bankruptcy plan.

Apparently, there is a loophole in how work rules and visas would allow such a situation to become fact. To paraphrase a letter from Helen T. O'Brien, Detroit-based Negotiations Representative for Professional Flight Attendants Association: "a foreign national flight attendant may be permitted to operate some flights within the U.S. without a green card. Generally, flight crews (as well as merchant marine crews) are permitted to operate within the U.S. under what is called a C1/D visa." Let's say a flight originates in Beijing, staffed with a Chinese crew that posesses C1/D visas. It lands in Seattle. Once in the U.S., Northwest Scheduling can use foreign nationals to cover flights that a U.S. flight attendant would have covered by stringing several domestic flights together over a two-day period, with a third day of flying that includes either returning to Beijing, or even a "turn" to and from Canada (because Canadian trips are considered "international"). This scenario could continue for the duration of the visa. And, depending on which country the foreign national is from, the visa could be good for six weeks or six months.

Since 9/11, flight attendants have been placed in a more active role providing safe and secure flights -- which is the role for which they were initially trained. Annually, from the time that they are hired and successfully complete their initial two-month training course, they are required to spend at least two days reviewing safety and operational procedures for each of the different aircraft on which they fly -- with both "hands-on" and written exercises. If they fail, they don't fly.

They are trained safety professionals who only serve drinks for the comfort and convenience of the passengers. To demonstrate what lack of regard Steenland has for the flight attendant workforce, I have been told that in meetings with other NWA brass that he referred to flight attendants as "glorified vending machines." This is infuriating. Fight attendants are assigned safety procedures pre-, during and post flight. Each and every flight attendant has a task to perform to maintain the safety of each aircraft Northwest operates. Flight decks are barricaded and bullet-proof. Flight attendants are the last line of defense on-board U.S.-based air carriers.

Outsourcing these jobs is a very real threat to our national security, not to mention down right un-American. For Steenland and other NWA executives to take multi-million dollar bonuses one week before they gutted the mechanics workforce isn't evidence of bargaining in good faith. These people are destroying our livelihood and the safety of our skies.

To illustrate my opinion on what we'd be inviting by hiring foreign nationals to fly domestic flights, I'll tell you what we experienced on our European cruise in 2001. After completing a great day in and around Ephesus, Turkey, we settled in for a nap in our stateroom. It was September 11. At 4:30 p.m., my mother-in-law came to wake us up. A plane had hit the World Trade Center. Of course, I pictured King Kong, probably an isolated incident where a private plane had lost it's bearings.

We watched the rest of the events unfold in horror on CNN and BBC World. As the ship left Ephesus for Istanbul we were unsure of what was going to happen at home, on the ship, or anywhere else for that matter. We couldn't fly home. We stayed in Istanbul, on the ship, for four extra days. Princess Cruises took care of us for the duration of the stay. The staff on the ship was comprised of people from all over the world. While always courteous, gracious and helpful, we were surprised by the comments from one crewmember, in particular. We had become acquainted this bartender over several conversations. She was from Romania. The evening after the attacks, our friends from Germany were talking with us and two other friends from California about what had happened. Our bartender's response to the events was, "we've lived with this sort of thing all of our lives. Now you know what it's like."

Gee, thanks. Where's the compassion? I don't ever remember watching the events that have happened in the Ukraine, or anywhere else in the world, and thinking "oh, well. That's them." I have made donations to various causes around the world. I do care about what happens to people outside our country.

Is this complete lack of regard for us and our nation what we want "serving Pepsi" on our domestic flights? Just imagine if some of the new flight attendants from around the world are a bit more passionate about their disregard for us and our way of life.
Posted by David at 9:32 AM No comments: