This time, I left my sunglasses

Many years ago, I left my heart in San Francisco. I love that place. And, apparently so do lots of other folks. The real estate prices out there are shocking, especially when I compare what we have here to what it would cost out there.

We went out there so I could accept an award at American Advertising Federation's ADDY Awards. We won a gold ADDY for this poster: 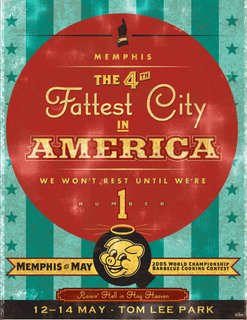 We started the trip with an early morning flight on Friday. We arrived at SFO around 11:00. At the Hertz counter, we picked up our Chevy Impala and drove to Redwood City where we met our friend Steven at his house. Thanks to the TripTik I printed from the AAA website, it was an uneventful drive without getting lost. After a relaxing couple of hours visiting, we headed into the Castro for a late Thai lunch. When Steven suggested this place, Cameron asked if there were drag queens working there. I suppose this question came from our having eaten at Lips in Greenwich Village the last time we visited New York. Everyone but the host and bartender were in drag. And there was a floor show that included "Supertragicmeanandnastyc*ntyb*tchydragqueens" sung to the tune of "Supercalifragilisticexpialidocious". Steven said, "no". But, as we were walking into the restaurant, he said "I guess I was wrong." Funny, I didn't notice right away. But, upon futher inspection I felt like I was watching John Leguizamo "be a latin boy in a dress" ("To Wong Foo..."). I wasn't sure from which of the Asian countries our "waitress' " heritage was based, but if it weren't for the very strong jawline, she might have pulled off the look. Anyway, the food was great -- probably some of the best Thai I've had.

After lunch, we walked in and out of some shops in the Castro, which has changed quite a bit since my last visit. Perhaps the time of day we were there caused things to look differently. But, I didn't notice as many clones in the vicinity. We walked several blocks up Market. When we passed a motel I had earlier considered booking us in, Steven said, "oh, no. You don't want to be there. This place is like a revolving door for hookups." Apparently there is all sorts of in and out activity, 24-7, including open doors for watching. Not our bag.

When we had to cut our walking tour short because of my desperation for a restroom, we stepped into Midnight Sun to use their facilities and discuss meeting one of Steven's friends there. Rather than enjoy the experience that is Midnight Sun (big-screen TVs playing a variety of videos in a friendly neighborhood atmosphere where apparently all manner of "types" mingle), we decided to make our way back to Redwood City instead. After some discussion as to whether we'd stay in and grill steaks or go out for dinner, we drove to Kabul and enjoyed food from Afghanistan. The place was dimly lit and decorated in such a way that wasn't much different that many of the Mediterranean or Asian restaurants we've experienced — which according to some of the research I've done — is common. One source said that Afghan food was a melding of Turkish, Greek and other cuisines. The food was out of this world. And there was lots of it for the price. Aushak (steamed dumplings filled with leek and spring onions topped with yogurt and ground lamb sauce and sprinkled with mint) was one of the three appetizers we ordered. The lamb kebabs were very generous and quite good. Cameron had an entree named Sabzi Challow (spinach stew with huge chunks of lamb and seasoned Basmati rice). It reminded me of Palak Paneer from India Palace, which I think is irresistible. We got much more than our money's worth.

By the time we got back to Steven's, I was beat and went to bed. Cameron stayed up and video taped Steven, his sister Cheryl and her friends' singing karaoke. Since I didn't wake up when he came to bed, I have no idea how late he was up — needless to say he was still tired the next morning — especially since we got up early and left for Napa at 7 o'clock. This is where the TripTik failed us. We ended up driving past his sister's house by about 25 minutes because the directions didn't match what we were seeing on the signs. No worries, though. Once we ditched the written instructions and made our own way using a map we were there in no time. Vicki, Cameron's sister, showed us around town and later took us to Napa Town Center where the exquisite mix of wood smoke and the scent of grilled steak permeated the air — which led us to Buckhorn Grill. Although Buckhorn serves food fast, it is anything but fast food. The place was more upscale than typical fast food restaurants. The prices for combos were comparable to those at any Wendy's or McDonald's.

Buckhorn specializes in grilled tri-tip sandwiches and salads. I hadn't heard of "tri-tip" before. According to askthemeatman.com, "tri-tip was seldom marketed when carcass beef or beef quarters were delivered to retail markets because there are only two tri-tips per carcass. This meant that there was not enough for a case display. Consequently, the butcher would grind or cube it." It can be broiled, roasted or grilled. 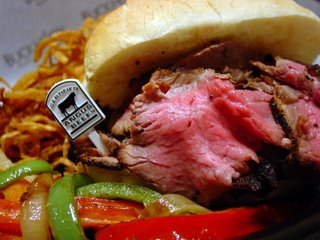 The way Buckhorn sears and chars the outside, leaving the center pink was delicious. I had my sandwich with flash-fried onions (I can't remember their name for them) and bleu cheese. Adding real horseradish sauce (not like the glop from Arby's) made it perfect.

After lunch, we said our goodbyes and headed northeast to visit my friend Kathy and her partner Judy who live near Pioneer. I hadn't seen or talked to Kathy in a number of years, so I was looking forward to reconnecting with her. And this would be my first time to meet Judy. I'm so glad we had the time to go. We arrived at their home in the mid to late afternoon. Judy hadn't made it home from work yet, so Kathy gave us a tour and described all the work they'd done to the house. It used to be a hunting lodge. Now it looks like a home out of the pages of Architectural Digest.

They took us to a pool party hosted by two of their friends where we met a whole community of people. They were all so nice. Some commuted to San Francisco a few days a week. Some still had homes in the city. But they all lived in or around the foothills of the Sierra Nevada. It appears to be near perfect living to me. Except for the occasional snow during winter.

After a delicious breakfast of fresh fruit with yogurt sauce and sundried tomato and goat cheese quiche the next morning, we headed back to San Francisco for the national American Advertising Federation's ADDY awards that evening. Joe Piscopo was the Master of Ceremonies. While the event was quite a bit like the local ADDYs, it was definitely a bigger deal. 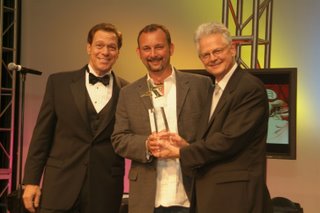 That's me between Joe Piscopo and Wally Snyder, President of American Advertising Federation.

The ceremonies ran about two hours over schedule — which pretty much eliminated any after-event socializing — we needed to be up at 4 AM to prepare for our flight back to Memphis. And we still had the drive back to Redwood City ahead of us. It was 11:15 PM.

So four hours of sleep later, I guess in the dreary-eyed rush to get to SFO and return the Impala, I either left my sunglasses at Steven's house, or in the car. Of course I didn't discover this until I had unpacked my bags and found the only thing to do with sunglasses — the empty case. Oh well. Sunglass Hut, I'll be seeing you soon.
Posted by David at 11:16 AM

ConGraTuFreakinLaTions! I have been meaning to tell you that for weeks now, you so goooood. -- xoxoxoxo -- bny

Did Joe Piscapo put on the moves? "I have some signed 8X10s of Eddie Murphy in my van out in the parking lot. You like signed 8x10s?"

Yeah, nice poster! The head cracks me up.