Labor Day Weekend. Usually, we spend it here with friends drinking piÃ±a coladas by the pool. Later in the evening we switch to appropriate cocktails and grill steaks or whatever sounds good at the time.

This year, Cameron, Doris, Billie and I drove to Troy, Alabama on Friday to visit with friends I hadn't seen in a long while. Unfortunately, Cameron had seen them a month earlier when he drove down for Shel's dad's funeral. After getting the dogs fed and settled, we spent the first evening catching up over a great spaghetti dinner. During the conversation we figured that it had been 10 years since we were all together. I was embarrassed. And, this is Cameron's best friend since before Kindergarten. They have remained in touch throughout their lives.

We promised that Labor Day from here on out was our time to get together. Next year, we'll see them up here.

They took us to the old square in Troy, Saturday, where we had lunch at Byrd Drugs. The place had the familiar scent -- sort of like the smell of Band-Aids, the hot grille and iodine -- that threw me back to the hot afternoons when my mother would pile my sisters and me in the Cadillac and drive to Walk's Drugs in Sellersburg for butterscotch milkshakes and grilled cheese. Or fountain Cokes and making straw paper snakes with a drop of soda ona crinkledd straw wrapper. I didn't see one of the old scales that would tell fortunes while reporting your weight. Playing on that scale was always a sure way to be reprimanded for misbehaving.

At Byrd's, the food was exactly as I expected. Because they only had enough bacon for one BLT (which had already been ordered by Leslie), I changed my order to a burger with everything. One of the women who ran the fountain -- I can't bring myself to call her a waitress because she is so much more -- brought various iced drinks to the table and told us that the shakes were coming up. Shel had ordered chocolate, and I requested vanilla. Hearing the blades on the old Hamilton Beach hit the sides of the stainless mixing glasses was a long unheard but comforting sound. When the shakes were ready she brought them over in the stainlesscontainers wrappedd in a paper napkin so our hands wouldn't stick. It was like two milkshakes for the price of one.

After lunch we walked next door to an antiques store. There were many items I was interested in, but none more than the one that seemed to say "you have to have me". It was a McCoy turtle sprinkler. I had been wanting one of these for years, but up until now they'd always been chipped just below the spout. This one was nearly perfect. No chip on the spout and most of the cold paint was intact. There wasn't a price tag on it but the man who was there gladly called the booth operator and got a price for me. If I remember the listing in the McCoy collectors pricing book, their initial price was right in line at $85. But, they offered to take $70 for it. So it now lives in my kitchen window, on one of the glass shelves, with many of my other pieces of McCoy. 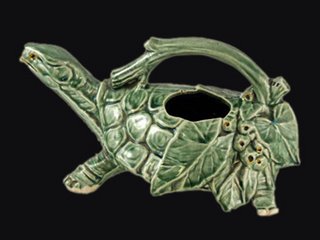 Cameron also found some champagne glasses with open stems, which he's been on a quest for for many years. We have a nice cut crystal set of six given to us by our friend Thom, but that's never enough on New Year's Eve. So, now we have 12. Although they don't match exactly, everyone will be able to watch in fascination as the bubbles ascend from the foot of the glass up through the stem.

After we paid for our treasures we left for Brundidge, another old Alabama town that has been given a new lease on life with the addition of a Wal-Mart Distribution Center. We passed through what might be considered the main intersection of "downtown" toward what I might consider heaven on Earth. You wouldn't know that I am a freak about logos, brands, and signs because I haven't mentioned it in my profile or on this blog before. But I am a died in the wool fanatic about these things. I have always loved just about any vintage porcelain enameled sign. I have several authentic and reproduction signs, a Vendo 39 Coca-Cola machine and a strong desire to add more to my collection.

"Heaven", or our first stop, was City Antiques -- home of "The Sign Man." I had anticipated seeing this place from the numerous billboards beckoning us as we drew closer to town. From the parking lot I could see that this was much more than I had expected. I wish I had spent time talking to the man who built this mecca. I learned from our hosts that he retired from his career a few years ago and has made his hobby his livelihood. I learned a bit more about this place from an article I found online at southernliving.com: 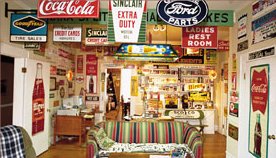 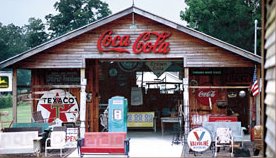 "It's okay to call Oscar McDowell O.K. In fact, he'd prefer it. He'll even answer to Alabama Sign Man, his self-dubbed title. "I figured that since I had more signs than anyone else, I was just going to keep that name," O.K. says with a chuckle.

"You'll find all kinds of authentic tin signs, advertising everything from RC Cola to Goodyear Tires, in his five rustic buildings. O.K. built one and moved four here from the countryside in and around Brundidge. Of course, he also carries old gas pumps, metal gliders, antique heart-pine furniture, and other pieces."

We met the man who builds the heart pine furniture at our first stop in Troy -- he told us to be sure to stop there. The tables, some seating up to 16, are made from 100-year-old stock. There were freestanding gas station signs for Spur, Cities Service, Pure, Standard and other brands that have disappeared from the highways. I could have been lost in the place much longer than I was, but ultimately it was a bit overwhelming. While I would have liked owning many of these pieces of history, many were unmarked. As such, I assumed that they were part of his collection and "not for sale". Later, however, I would learn differently.

We tracked back to the main street through town and browsed through a few other antiques stores. In one, a young man asked if there were any questions he could answer. He was minding the store for his mother, who created many of the pieces in the shop which contained few if any antiques but lots of other things, including coiled clay vases and hand-decorated vintage furniture. We walked across the street to a couple more stores, including Charlotte's Web, where Teresa bought Leslie a small white doll's cradle for Brianna's room. We stopped in another store that was part antique mall, part junk store. There were lots of old electronics and other cast-offs here. After a while we continued away from town, past City Hall -- a white clapboard structure with long, sweeping porches that looks as if it used to be someone's mansion -- to the last stop on our antiques pilgrimage.

I can't remember the name of the place, but we wondered if this store was somehow connected or related to City Antiques. There were the same types of old signage and gliders, plus a fair amount of other things City didn't have. Like a curio cabinet packed full of vintage Fiesta and several long, low display cases with McCoy, Hall, Haeger, Roseville and other kinds of pottery. There were armoires filled with cast iron cookware and other cabinets filled with vintage Franciscan Desert Rose. When we asked if the resemblance was coincidental or intentional, the man jokingly said, he'd "taught him [O.K.] everything he knew". When I mentioned that I figured that many of the things at City Antiques weren't priced and assumed thatthey weren'tt for sale, he responded with, "see?" Here, everything was clearly priced. In fact, I wondered if some of the prices were a bit high even though some of the artifacts could be considered quite rare.

After our day of antiquing, we returned to Shel and Teresa's for a barbecue rib dinner complete with slaw and baked beans. It was a nice day. During dinner, we discussed the next day's plans and altered them a bit. We planned on playing golf. But after Cameron and I expressed an interest in seeing Shel's place of work, we added that to our morning.

The next day, Shel took us on a tour of the amazingly automated Distribution Center, where he works. For fear of leaking secrets I won't discuss details we discovered inside. But, it was awesome.

From there, we went back to the house for lunch and later drove to Tartan Pines for an afternoon of golf. As this was my first time to play anything more than miniature golf, I was at once excited and apprehensive. In the clubhouse we went to Shel's sister Christine's office in the pro shop. She runs the country club, which is situated in a neighborhood of multi-million dollar homes (at least by Memphis standards). I instantly liked her. She was happy to see everyone, but wasn't going to be able to join us for golf. She gave us keys to three golf carts and told us where to get a set of clubs for me. She has a building at the far end of the driving range that houses the equipment she uses to give private golf lessons.

After Shel began giving me some basics about how to stand, hold the club, and swing, we were surprised to see Christine ride up on a golf cart to give me a half-hour lesson. WOW. She was great. If I can get my butt out to the driving range sometime soon I'll probably remember everything she taught me. I started out with a 7-iron, and continued with that after we left the range and hit the course. We were playing a 3-man scramble with Shel's mother, Jeanne, Cameron and me. So I didn't completely suck. The one time I tried teeing off with a driver ended with my ball in the cesspool end of a pond, scaring some small frogs into the water. It's going to take some practice, but I can see me really liking this game.

The next day, we were packed and on the road toward home by 10:00 -- which should have put us back in Memphis around 5:30. However, much to my surprise, everyone on the road between Troy and Montgomery was driving 90 m.p.h. I am guessing that some were even driving 95. So, rather than be overrun I fell in. Imagine my surprise when we pulled in Memphis at 3:15. And in our driveway at 3:35.
Posted by David at 11:13 AM