Don't you love when you place your hands on the wrong keys? I've gotten so flustered that I can't even remember what I was going to type for the title. 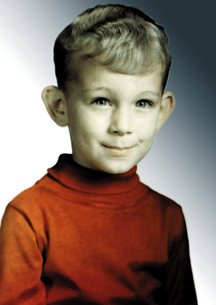 Anyway, time to say goodbye to my Kindergarten picture which has been my profile image, and hello to a more recent shot.

Cameron is home -- I'll have a happy Thursday evening and hope you do, too.
Posted by David at 4:01 PM No comments:

Take This Card And Shove It

Starting several weeks ago I began exorcising the demon that is temptation to impulse purchase large ticket items on credit cards. It began with the payoff and closing of my Platinum American Express.

And so, it continues.

Last week I paid off Blue from American Express, Washington Mutual VISA, MBNA American Advertising Federation MasterCard, Furniture Row (Oak Express), Target RedCard VISA. As the amounts have posted to my checking account I have called and cancelled them, one and all--including other accounts that had no balances but were still open, like Pier 1 Imports and Macy's. How liberating.

I think it's funny that all but two of the victim institutions automatically sent me to the "retention department" where the first thing they say is "We're sorry to hear that you want to close your account, after all, you've been a customer since" the birth of Christ. They subsequently began throwing offers of lower interest rates, rewards points and anything but the promise of a life showered with love, wealth and and 40 virgins to keep earning my interest payments. One of the transactions happened the way it should across the board. "Press 3 to cancel your account." After pressing "3" the recording said, "your account is now canceled. Good bye." How short and sweet.

Those liberating experiences aside, I bought out the lease on my Passat last Saturday. It is another step toward fiscal sobriety. While I don't intend to keep the car forever--it wasn't really what I wanted in the first place. I got pissed off at the Lincoln-Mercury dealer over warranty issues with the Town Car and thought, "I'll be damned if I pay for this warranty work, and I'll be damned if I drive this car with systems inoperable. I'll show them." But, alas, I got shown. The Passat wagon I wanted was $45,000--just a bit ridiculous to me. So I settled for a Passat GS. I have only logged 30,000 miles in the four years I've leased it. On average, it should show somewhere between 48,000 and 60,000 miles.

This means I could have turned the car in and walked away upon the lease term ending, but that would let the dealer reap the benefits of my limited usage and exceptional care. Buying it out gives me a chance to sell it myself for better than average resale and walk away with a little cash. We'll see.

Next on the agenda? A campaign to snuff out butts for good. I signed up on QuitNet as I discussed in an earlier post. Now, Cameron and I have set Halloween as our last night to smoke. He's bought his Costco-sized supply of Nicorette. I am still trying to decide how I'd like to approach quitting this time because I want it to be the last time. I hate the gum. The patches are too strong (I smoke any where from a half-pack to a pack of wussarettes - Now Menthol - a day. They're practically not a cigarette at 2mg tar and .2mg nicotine when you compare them to 17mg tar of the Benson and Hedges my dear friend Cleo smokes). Thankfully, Cameron agreed to switch to Now regulars when we first met -- he just smokes a lot of them which is why he needs the gum. ICK. And if I'm not mistaken, the lightest dosage from a patch is twice the nicotine that I get from smoking. Why increase the dosage?

This time I'm determined to figure it out though. To alter the promise I recited on many a Tuesday evening in my youth, "on my honor, I will do my best to do my duty to quit smoking," (and here's where it gets tricky) "to help other people at all times," (might get tough even if I try not to be bitchy from withdrawal), "to keep myself physically strong, mentally awake, and morally straight."

Yeah, I know. There could be implications from the morally straight part, but that's another subject completely. Who's concept of morally straight are we talking about, anyway? As far as I'm concerned I am living morally straight. But, I'm positive that BSA would take issue. To that, I say, whatever.
Posted by David at 11:24 AM No comments:

The Exorcist scared the crap out of me although I really liked Tubular Bells.

Today, I am beginning a week-long program to exorcise toxins and fat. The last time I did this I lost 15 pounds. I can't think of a better way to get fired up about getting back on my exercise bus. When I was going to Boot Camp religiously, I lost 24 pounds in 8 weeks. And, I went from barely being able to run a sixteenth of a mile during a session to running 3.5 miles per class. I felt great about my accomplishments but I let the holidays get in the way. Can't go tonight -- have to go buy food for Thanksgiving dinner. Of course, Thanksgiving week was a bust. Then it was Christmas parties. Then the first of the year.

I decided that I would rather work out indoors than outside. So I joined Peabody Athletic Club. It seemed to be less populated than the Downtown "Y", and the likelihood of being approached by someone in the wet area was pretty much negated. So I worked out there for two months. When parking became a hassle I quit that and went back to Boot Camp for a month.

That was right before my 25-year high school reunion. I looked and felt great. But, two years later, I'm back up to 185. My eating habits (read: portion control and meal times) have fallen by the wayside. I still eat well, choosing to cook fresh things for myself, avoiding fast or processed food.
Posted by David at 12:09 PM No comments: