Today was a day of a lot firsts that have me pretty excited. This morning, at home, while I was getting old paperwork together for shredding I found myself reaching for a cigarette. Twice. Yet, I intentionally threw away the one cigarette I had left as soon as I got up because today was my quit date. So, after arriving at work I got settled, listened to voice mails and read e-mail. I opened the file for the project I have been working on for the last week and began plugging away at it. Knowing that I was going to be sitting inside Temple of Deliverance Church of God In Christ for an hour or so beginning at 10:30 meant that I had to get some work done before my early "lunch" hour and a half.

I ducked out at around 9:30, ran up to Walgreens and purchased my first box of Nicoderm CQ. While I was there, I found a bag of Popcorn, Indiana Kettlecorn Popcorn. The packaging was so "up my alley" that I had to buy it for the bag, alone, for my reference file. Even though I'd heard of Kettlecorn, I'd never had it and wasn't really that curious about it. I mused about how the company is called "Popcorn, Indiana," yet is based in New York. (There really is a Popcorn, Indiana. Growing up in Indiana I know, too, there's lots of corn.) I carefully removed the hideous chartreuse green "$1.99" sticker that the Walgreen's people stuck haphazardly on the bag and sat it on my desk so I could occasionally look at the simple, folksy design. 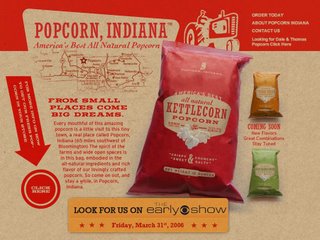 Great design gets me every time.


At 10:30, Patty, a former co-worker who's still a good friend, picked me up to take us to the Temple for a political rally for Harold Ford, Jr. The race for Senate between him and Bob Corker is pretty tight, from what I understand. On the dias were some expected dignitaries. Beverly Robertson, the director of the National Civil Rights Museum was on hand. And, God Bless her, two of the others mispronounced her last name as "Robinson". There was Gail Rose. Two other state senators. Bishop G.E. Patterson and his wife. The candidate's father, Harold Ford, former 9th Congressional District Representative. But the main reason I attended was that President Bill Clinton was speaking. So, the second first for me was seeing a President in person. He is still as charismatic, optimistic and insightful as he ever was. He talked about the difference between conservatives (be they Democrat or Republican) and ideologues, saying that conservatives will stop digging when they find themselves in a hole because they realize that they're looking in the wrong place for an answer. In Arkansas, he said, 2+2=4, just like it does in Washington, but that ideologues will test the facts over and over even if they continue getting the wrong result. He said an ideologue believes they know the answers before the question is asked. And, when they find themselves in a hole, and still haven't solved the problem they ask for a bigger shovel. There's more to how his speech moved me but that is totally another subject.

Back at the office, the third of the firsts was opening that bag of popcorn. What a surprise! I read the "story of the product" on the back of the bag while I ate a few delicious kernels. I didn't know that to make kettle corn, cane sugar was added to the kettle along with the corn and oil. At first I thought the popcorn was like a very light version of Cracker Jack, but it was more like the flavor of Fiddle Faddle -- not as dark and heavy as the former. The bag says, "crispy & crunchy, sweet & salty." And, I'm all over anything salty. I had to share it not only because I often go from office to office in the creative department with something new to share, but in this case if I hadn't shared it I would have eaten the whole bag. And, that goes against my renewed nutritional aspirations. Portions, portions. Calories, calories. (Thank you, Robert Harling, for giving Truvy the opportunity to sarcastically mock the woman carved from cream cheese while eating wedding cake at Shelby's reception.) 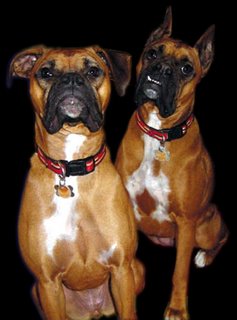 After work, I went to Petco to buy cookies and Dentabones for Doris and Billie. Once back in the car, I contemplated how pleased I was at making it through the day without a cigarette. So to reward myself, I dialed Cingular directory assistance and called the celebrated Lotus restaurant (of which I'll write more later) to get a carry-out dinner of Vietnamese Vermicelli and Vietnamese egg rolls. I have some left for lunch tomorrow. Maybe I'll write about the virtues of Lotus' vermicelli then.

I hear Nancy Grace on the television. So, as this day of firsts draws to a close, I have not smoked 18 cigarettes. I have saved nearly $4. And, it's time for a good night's rest and looking forward to day two.
Posted by David at 9:50 PM