How the Oil Spill Might Benefit Gulf Marine Animals

posted by: Jasmine Greene 11 hours ago on Care2.com 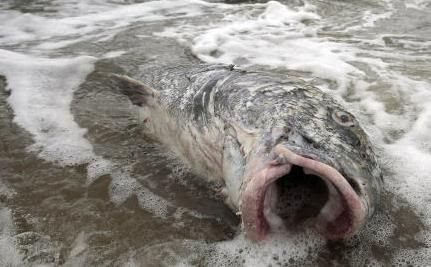 Almost two weeks ago, the National Oceanic and Atmospheric Administration (NOAA) placed a ban on commercial fishing in the Gulf region for 10 days due to the BP Oil Spill. Since then, the NOAA has increased the time of the ban until May 17 and has expanded the boundary of the closed fishing. Currently, the area represents around 7% of the waters in the Gulf. While the oil spill is an environmental tragedy, it may help to repopulate the Gulf and put more pressure on oil companies.
While commercial fishing has always been an environmental issue, it remained in the backburner until now. One of the major issues of commercial fishing is the actual method to catch fish via bottom trawling. Bottom trawling is used for deeper parts of oceans to catch very specific types of marine life. A large weighted net is dragged across the ocean floor in order to catch everything in the net's path. Dragging these nets across the floor stirs up sediment and destroys many reef habitats. These nets are about the size of a soccer field and while they are used to catch specific types of fish, around 50% of what is caught in the net is thrown back into the ocean, many injured or dead [Source: Gulf Coast Preserve]. While the NOAA has banned bottom trawling in certain places (mainly the Pacific), locations like the Gulf of Mexico are still open to tens of thousands of commercial fishers, with Louisiana supplying about one third of the US seafood supply, second largest next to Alaska. According to the Environmental Work Group (EWG), there are about 50% more boats than needed to supply seafood to the US, leading to bleak results in the US. A 2007 NOAA report stated that 24 percent of 190 monitored fish stocks were still categorized as overfished, and another 17 percent were deemed subject to overfishing. With help from the government, the Magnuson-Stevens Act was drafted and the NOAA stated that they will halt overfishing in 2010 by enforcing annual catch limits and making sure fishers follow scientific advice in fishery management decisions [Source: NOAA]. The organization has received support from the Obama administration to draft plans for a new ocean policy and marine planning system.

Despite the work from the NOAA and from the government, the Gulf of Mexico contains at least 20,000 licensed bottom trawlers and a multibillion dollar industry [Source: Reuters]. The recent oil spill and banned areas have affected business as many fisherman in the Gulf have no option except to wait for the ban to be lifted and/or help with the oil spill cleanup if possible, though only about 23% of the shrimping areas have been closed off to fishing. Still, many people are taking a "Better safe than sorry" stance when buying seafood since chemicals ingested by marine animals affect those ingesting the fish. But it isn't just the spill that is harming these fish, it's also the cleanup. The use of dispersing agents contains numerous harmful chemicals including 2-butoxyethanol, which causes headaches, vomiting reproductive problems in humans when exposed to high doses. While dispersal is the most effective way to clean an oil spill, BP has already used up a third of the world's supply, with the leak growing increasingly larger [Source: Pro Publica]. threatened wildlife populations, like the Blue Fin Tuna, also use the gulf as spawning grounds. While the oil affects adult fish, the larvae of the fish are especially sensitive to toxins and chemicals. Cleaning up the oil spill might not take a long time, however the effects of the spill and cleanup are far-reaching.

While the environmental consequences are staggering, there could also be some benefits to the gulf. Should the ban on commercial fishing in the Gulf continue for the duration of the cleanup and/or longer, the fish and shrimp population may increase. Thomas Shirley, of Texas A&M, along with other professors and scientists have begun viewing the spill as an opportunity for conservation and replenishing the fish supply. With all the bottom trawling and ever sky-rocketing demand for fresh fish, the fish population and diversity have drastically reduced. While the oil is another stressor on the marine habitat and animals, Daniel Pauly, a professor athe the Fisheries Institute are the University of British Columbia states, " It is possible that a massive rebound of the fish population will occur because we are not fishing them. If the fishing is discontinued for a month or two, or a season, we may see massive changes in the Gulf" [Source: On Earth].

While the environmental effects of the oil spill are devastating, it has forced changes in the government as well. Chris Oynes, head of the oil and drilling program, announced that he would retire by June 2010 [Source: Huffington Post]. Drilling in the gulf has also been indefinitely banned, and many future drilling ventures, such as the one Shell planned in the Arctic, are beginning to see much stronger opposition [Source: Associated Press]. In the wake of such disaster, the horror and public outcry might force oil companies and governments to restrategize for a greener future.
Posted by David at 8:36 AM